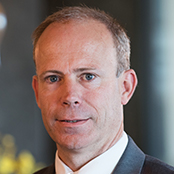 He is a member of the South African Maritime Law Association and served on the Executive Committee for eight years between 2002 and 2010.  He is also a member of the Durban Marine Insurance Association.  He joined the firm in 2006.